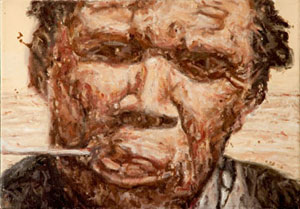 A solo exhibition of oil paintings by Cobus van Bosch was hosted from 29 January to 19 February 2011.

This series of paintings is part of an ongoing project aimed at the recognition of “forgotten” and lesser-known, but important, historical figures and episodes in the southern African socio-political past.

The images form a series of painted portraits of some of the prominent captains and leaders of the Griqua, the Orlam groups such as the original Afrikaners, and other mixed race and Nama groups of the 18th, 19th and early 20th centuries. It includes the renowned freedom fighter, Hendrik Witbooi, the Griqua leaders; Nicolaas Waterboer, Adam Kok III and AAS le Fleur, as well as the last Afrikaner captain, Jan Jonker Afrikaner.

The arrival of European settlers in the mid 1600’s at the Cape led to the birth and formation of people and groups of mixed racial and cultural origin. The ancestors of these people were a mixture of Europeans, slaves from other parts of the world and the Khoisan and Nguni groups of southern Africa.

During the 18th century many of these people, then known as “bastards” or “Afrikaners”, formed groups and, to escape colonial rule, trekked into the African interior, mainly the Northern Cape and further north, as well as other parts of southern Africa. Amongst the livestock farmers who were the main component of such groups were also adventurers, outcasts of society, fugitive criminals, army and navy deserters and, of course, runaway slaves. The best known of these groups is the Griqua, initially known as “bastards” but who changed their name to the Khoi word Griqua in the early 19th century.

Other groups from the Cape, of whom many had strong Khoi roots, moved to the interior and settled in the Northern Cape and the south of what is now known as Namibia. Also known as Orlams, they played a prominent and often dominant role in these territories for many years.

These groups led a rough pioneering lifestyle, and while the Cape colonial authorities were waging war against the Xhosa in the Eastern Cape, prominent groups such as the Orlam Afrikaners and Griqua governed large territories in South Africa and Namibia. But it was the colonizing of Namibia (by Germany), the discovery of diamonds in Griqua and Nama territories, and land-hungry white farmers from the Cape Colony that led to the suppression and weakening of the Griqua, Orlam and Nama groups. Most of these groups still exist today but are largely stripped of political and economic power.

Based on often rare, monotone photographic documentation from libraries and other archives, these portraits are in the format of large, full-colour close-ups of the faces of Nama, Orlam and Griqua leaders, generally known as “captains”. Their fearless and defiant gazes enforce their statuses as respected and often feared leaders, their weather-beaten faces echoing the rough and “untamed” semi-desert territories over which they ruled for so many years.

Although many of these leaders and their people are today part of the history of Namibia, rather than that of South Africa, many founding leaders and later captains of well known groups such as the Afrikaners, Witboois, Lamberts and the Rehoboth Basters of Namibia were born in South Africa (Cape, Boland and Karoo). These leaders and their followers were practically exiles who moved out of the Cape Colony in search of greater freedom. But in time German colonialism, and later South African rule, caught up with them, and their struggle and war against oppression was in opposition to similar enemies as those of their comrades in South Africa.

The prominent role played by many of the “bastard” tribes in the early modern history of southern Africa always was, and still is, inadequately reflected upon in the official written and visual narratives of our past. These portraits serve not only as works of art in their own right, but also as a contribution to a more representative historical documentation of the southern African past.

Of interest is the origin of the word “Afrikaner”. Initially it was used to refer to a person of mixed racial origin. The first group of people who called themselves Afrikaners were the descendants and followers of Oude Ram Afrikaner (born in the 1690’s in the Tulbagh district). Until the death of Jan Jonker Afrikaner in 1889, the Afrikaners were an influential Orlam group in the Northern Cape and especially Namibia, where they founded the capital of Windhoek. It was only about 200 years after the birth of Oude Ram Afrikaner that the descendants of certain white settlers started to call themselves Afrikaners, and accepted Afrikaans, the language of the Bastards, as their own.


Opening speech by Max du Preez
Thank you, Cobus and Johans, for the invitation to say a few words at the opening of this special exhibition. This remarkable collection of paintings is a powerful artistic and political statement that was long overdue.

These names, like poetry, conjure up images of a heroic past, of great courage and great tragedy, of fascinating tales of human behavior. And yet we, South Africans, prefer to learn and talk not about them, but about Jan van Riebeek and Simon van der Stel and Piet Retief and Shaka and Sandile and Hintsa. We have allowed to happen to us that which has happened all over the world. History is dominated and written by the victors, by those with political dominance.

The faces of almost all the men around you belonged to descendents of original peoples of the African subcontinent; the Khoisan: slaves and Europeans, for reasons of geography, culture, population numbers and historical circumstance. The Khoisan did not turn out to be a very successful people. Unlike the Zulus, Xhosas and Whites, they don’t dominate. But they bore the brunt of early colonialism much more than the black Nguni and Sotho farming groups who now have political power.

The Khoi and Bushmen were quite easily subjugated by the first wave of colonialists, and a great number died in a tragic flu epidemic. Most of these tough men around you came from people who refused to be crushed, or become servants and farm workers, and they migrated to the Northern Frontier and up the West Coast. The stories and intrigue of the Orange River frontier of the 18th and early 19th centuries are much more fascinating than those of the Eastern Cape Frontier, yet that’s all we teach our children about.

I am very happy that Cobus has had the insight and inspiration to break through political correctness and ethic chauvinism, and bring these people around us back to life, and spectacularly so.

A mature nation knows its history, all its history, not just the heroic stories of those who had power.
Max du Preez 2011