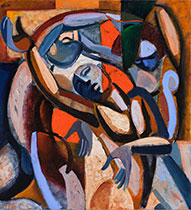 Part one investigates the genre of portraiture and identity, juxtaposing paintings with sculpture as well as works by Modern African Masters with those of contemporary artists. As human beings, we are deeply driven by our sense of identity. We categorize ourselves, and others, according to religion, culture, skin colour, language, profession and whatever else we believe separates us. Although we broadly define ourselves by our membership of such groups, we also define ourselves by comparison and contrast with others, even when these experiences are predominantly based on external observations or ‘skin deep’ qualities.

Contemporary portraiture has evolved beyond the historical memorialization of the rich and powerful, the sentiment of ancestral records, or the anthropological documentation of exotic tribes. Human behaviour, characteristics and identity offer a rich study field for artists – as they do for psycho-analysts – and provide them with the challenge of capturing this in all its complexity. The pride and beauty captured by Dumile Feni in his striking rendition of an African head, the rich, exotic nature of Irma Stern’s ‘Fruit seller’, the fragile innocence of Maggie Laubser’s ‘Girl with folded arms’, the whimsical character of Ezrom Legae’s ‘Head of a child’ and the playful exuberance of Richard Mudariki’s ‘Bridesmaid’ are good examples of such interpretations.