Warrick Kemp - The Pigs are Coming 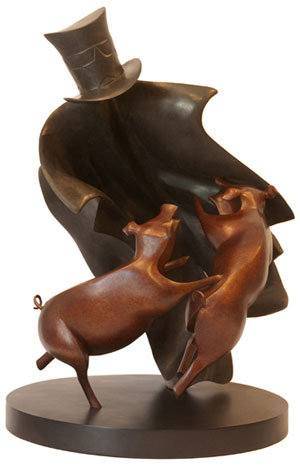 A solo exhibition of bronze sculptures by Warrick Kemp was hosted from 28 November 2009 to 16 January 2010.

During the 1990’s I became intrigued with the media coverage on the Israel-Palestine situation; there was clear support and empathy towards the Israelis, whilst simple and honest questions were seldom asked about the plight of Palestinians; their actions dismissed as those of fanatics.

What I found fascinating was the fact that this propaganda and misinformation was not spread by Israel alone, but also by the two Western super powers and their corporate media.

For me, this began a process of re-visiting history and investigating the ethics behind government policy; in particular the policies that benefit big business.

This body of work represents a satirical view of the incestuous relationship between government, business and our free market system. It comments on how this relationship promotes a system of power versus powerlessness. The focus of this series of bronzes is on the co-dependency of governments and their multi-national corporations, and how foreign policies are used to benefit both. It highlights how the powerful countries dismiss international law at the expense of global security, and how we have come to accept it.

Contemporary society’s addiction to consumption, ideologies like nationalism, and an unquestioning view of authority and cultural heritage are woven into the collective psyche from childhood. This conditions a ‘free’ and ‘democratic’ public to be more easily guided.

Between 1910 and 1930 the United Kingdom and United States formulated groundbreaking methods of using propaganda for civilian control. Utilising government intelligence, combined with corporate public relations and advertising, complex ethical issues could easily be swept aside. The principles of persuasion were used in new ways with the introduction of mass media. Radio, cinema, and television news allowed propaganda to reach an ever-larger portion of the population, orchestrating public consent with greater speed and efficiency.

With the growth of media corporations like Fox news in the 1990’s, a delivery system was created to weave opinion and news together in a more entertaining and creative way, manipulating the truth and presenting a distorted view of history.

After the attacks in the United States on September 11, 2001, and the following US invasion of Afghanistan, the US began accusing Iraq of being a possible terrorist threat and housing ‘weapons of mass destruction’. With an abundance of accurate facts and evidence available, it should never have been possible for the US to rally up enough domestic support for a second invasion of Iraq. However, the media broom ‘swept clean’, the religious right were engaged and the US government found new ways to exploit the next generation of frightened Americans. Against international law, and with world condemnation, the US government, once again, carved the path which allowed big business to have its way.

Each sculpture in this exhibition represents an aspect of our current world order; a system fuelled by power, greed and coercion. This series reflects a world in which inequality is accepted, consumption is lauded and justice has little meaning.