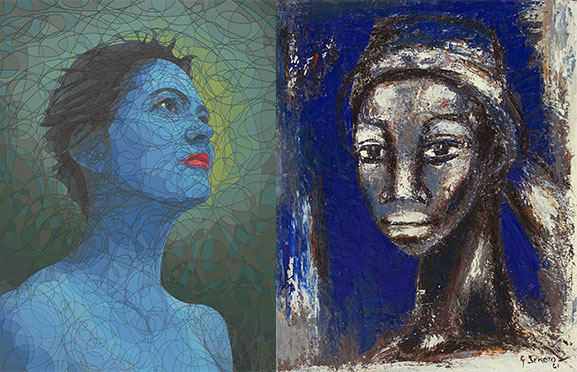 Masterpiece? Isn’t that a bit presumptuous? was the standard reaction from most artists we approached to participate in this exhibition – and yes, they are of course all quite correct if our objective was to present all the works on this show as ‘masterpieces’. But, it is not – we have set out to investigate the concept of what is regarded as a masterpiece, how or by whom that is decided and most importantly, what all the creative elements are that need to converge in that magical moment to make the creation of a masterpiece possible.

The very diverse and eclectic selection of artworks assembled for this exhibition also include works by past masters – those artists regarded as the ones who have achieved the status and distinction of having created masterpieces. These works serve as a yardstick to help us gauge how the contemporary works measure up in terms of technical quality, emotional impact and timeless content.

The idea for this exhibition originated from a desire to create a platform where all the wonderfully gifted artists we represent and know can collectively ‘put their best foot forward’. Despite this presumptuous, intimidating and nerve wrecking challenge, the invited artists all stepped up to the plate. They engaged the concept head-on, transcending their individual barriers – whether conceptual, technical or otherwise imagined. The results speak for themselves and carry the trademark qualities of recognized masterpieces – technical excellence, conceptual integrity, authentic content and clear communication. When these elements are fused together by master artists, their creations bring us the timeless pleasure of emotional and cerebral stimulation as well as intellectual and philosophical interaction. The idea of an artist confronted with a sterile, white canvas or piece of formless clay from which to create a work of art that will be able to capture and communicate magical emotions and powerful messages is most intimidating. Apart from pure, raw talent, it demands bravery, commitment and unflinching self-belief to be an artist – something most art lovers take for granted. We should never lose sight of the difficulties artists have to face in order to succeed and should always respect their efforts whether we rate them as masterful or not.

We asked the artists to let us have their thoughts on what the concept of a masterpiece means to them and encouraged them to be as frank and uninhibited as possible. Their responses were insightful and resonated so well with our views that we have selected some extracts below – the full texts are published with the illustrated works in the catalogue.

My initial reaction to an exhibition titled “masterpiece” was to cringe about the presumptuousness of it. Usually masterpieces are identified in a consensus by experts about artists who are preferably dead. We however live in a disenchanted world in which the notion of a “master” seems amusingly anachronistic. We also live in a cynical age that wised up to the way meaning is constructed by discourses. Powerful galleries, wealthy patrons, market speculation, imposing museums, art-historical constructs, influential critics, to name a few, mould the meaning we attribute to art. - Anton Karstel

The artist makes because he or she must. It is arrogant for an artist to claim masterpiece status for his or her work. Only time will judge. - Marlene von Dürckheim

Those few individuals who become “masterful” at their craft - the “masters” - have learned how to produce the results with minimal effort. They make it look easy because, after decades of toil, it has become easy. In my opinion, a “masterpiece” is an example of this phenomenon. It is a work imbued with genius, yet it seems void of effort. - Alex Emsley

For me the work has to be done with integrity, passion, creativity and exceptional craftsmanship. In order to achieve Masterpiece status the work also has to withstand the test of time and the scrutiny of both peers and experts.- Hennie Meyer

Art is really something that happens in one’s mind, with the painting as the by-product. A painting can be considered a masterpiece when the connection between the idea and the realisation thereof is strong. - Gavin Rain

It is difficult to walk away from a masterpiece unaffected, it stays with you. It takes you away from yourself and your environment. It grabs you. Often you don’t know why. - Hanneke Benadé

There exists a universal, very idealistic need to create a life that resembles a masterpiece, with harmony, balance, pattern, shape and texture. - Alet Swarts

In all our differences a golden thread runs through us all that enables the recognition of something sublime or of a higher value. A Masterpiece is the ultimate result when craft and meaning meet through medium to recognize the beauty of our flaws. - MJ Lourens

We encourage our fellow art lovers to view, interact and analyse this selection of artworks and formulate their own definition and opinion on the concept and meaning of what a masterpiece is or should be.