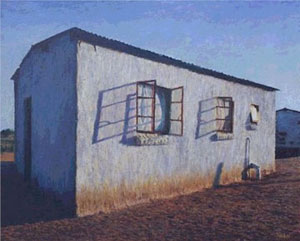 ‘Platteland’, a solo exhibition of oil paintings by Walter Meyer, was hosted from 15 to 29 August 2001.

Walter Meyer’s earliest memories are of landscapes – not people or incidents. His fascination with the landscape manifested in watercolour paintings in the style of Jentsch or Battiss during his formative years, and evolved to his current works in oil where final brushstrokes are spontaneously though accurately laid down onto white canvas.

His relationship with the landscape is rooted in his emotional and spiritual experiences encountered living in or travelling through it.

When asked about his own work, he simply talks about the sky, the elusive qualities of the light at dawn or dusk, and the heat of the arid landscapes he so accurately depicts. Meyer’s paintings show signs of his great affinity for the work of Adolph Jentsch, although it is often compared to that of Pierneef. Like Pierneef’s work, it speaks of emptiness and the absence of human drama, but while Pierneef’s empty and open vistas promised settlement and prosperity through productivity, Meyer’s landscapes often portray the failure of that settlement, showing what people had left behind and fled from.

The Jentsch-like spiritual quality of Meyer’s oils is most obvious in his paintings of the Kalahari after the rains, the winter grass on red dunes, and the simmering plains of the Namib Desert.

Jentsch’s affinity for Chinese art and philosophy resulted in a particular interpretation of the solitary Namibian landscape, highlighting humanity’s insignificance in vivid contrast with Nature’s majesty and overwhelming power. He is quoted as having said: “My experience of the landscape is shown in the spiritual vision which I put into my painting”. Jentsch felt that landscape painting “offers the opportunity to reveal experiences of the spirit intuitively”, which is in line with the old Chinese landscape painters who believed their works to be the expression of their souls.

In a 1997 article published in Vuka magazine, Liese van der Watt expresses her views on Meyer’s town- and landscapes as follows : “What makes his landscapes so notable and interesting is the way in which they respond to and, more importantly, depart from what has become a rather boring, even exhausted tradition of art making.

His work is a response to traditional landscape painting because it champions realism. For this reason, his art seems unfashionable, conservative even, in relation to contemporary artistic production here and in the rest of the world where realism, and indeed painting itself, have gone out of vogue. This penchant for realistic portrayal as well as the fact that Meyer prefers to work in the very traditional medium of oil painting, is quite surprising for an artist who received his training in the 1980’s when neo-expressionism, conceptualand installation art dominated most academic institutions such as the University of Pretoria and the Staatliche Kunstakademie in Düsseldorf where Meyer studied for four and three years respectively between 1983 and 1989 – and indeed produced abstracted works.

But it is through the kind of realism which he utilises now that Meyer manages to break away from the medium of traditional landscape painting. In contrast to early landscape painters like Volschenk, Hugo Naudé, Pierneef and even more contemporary ones Meyer’s is a realism that is completely devoid of glamour or beautification and instead focuses on the ordinariness and banality of the South African landscape and platteland.”

In relating his work to the 18th century Romantic tradition of landscape painting, Van der Watt writes: “… neither the terms romantic picturesque nor charming come to mind. Decay, neglect, abandonment, dereliction rather offer a more appropriate vocabulary to describe the mood of this work which seems ominously close to our present, in fact, too close for comfort. This work is typical of the South African landscape, which is characterised by built structures, dotted by small dorpies, which are enveloped or encased, by an all-expansive landscape. These are landscapes which Ivor Powell once described as the view you see through the windscreen from the open road as you drive between somewhere ending in “fontein” and somewhere ending in “spruit” ”.

Van der Watt concludes: “Meyer’s art describes human displacement. His works retreat from narrative – they carry no promise for a brighter future nor are they nostalgic for a better past. Suspended in the ‘now’, his works proclaim not ownership and authority, but transience and temporary residence”.

When viewing Walter Meyer’s oils, the underlying sense of honesty and truthfulness is overwhelming, as it is evident that his soul has been touched by what he has chosen to paint. Clearly, his melancholic personality allows the experiences of his soul to be amplified by the mood of whatever metaphor he has chosen from his surroundings, and this is intuitively communicated through his medium.

Meyer ultimately manages to present beauty and meaning by extracting it from, more often than not, the banal and the mundane of our apparently insignificant “platteland”.