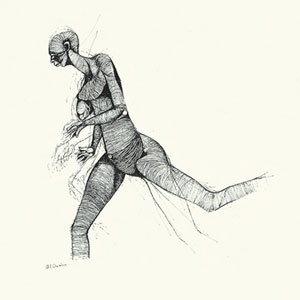 An exhibition of Dumile Feni drawings from 1968 was held during April 2009.

In an interview with Eva Cockcroft for Art and Artists in 1983, titled I Come From a Long Tradition, Dumile claimed that the most important influence in his artistic development was his childhood visits to the Bushman caves with his mother, where he saw the paintings of his ancestors.

The statement by Dumile quoted above comes from an article in SA New Writing, Photographs & Art (1987), in which he confirmed this early influence, adding that the cave paintings still inspired the style and sensibility of his work.

Dumile had started exploring the Rotring™ fine pen medium shortly before his departure from South Africa in 1968. This was a significant departure from his large scale charcoal drawings exhibited at Gallery 101 and the Durban Art Gallery in 1966 and 1967.

Fine lines were employed in part, in most of Dumile’s drawings to achieve various pictorial effects. The works he completed on his arrival in London are particularly significant as they are characterised by the consistent use of fine lines throughout the drawings.

When researching the history of these works and the circumstances under which they were produced, it becomes apparent how important they are with respect to the personal upheaval he endured at the time. Apart from being uprooted from the land of his birth, he also had to leave behind his partner, Florence Dyali, who was seven months pregnant with their child.

In South Africa, because of Apartheid regulations, Dumile had been unable to secure authorisation to live and work in Johannesburg despite having a supply-contract with Gallery 101. Authorities threatened to move him to a tribal homeland, which would effectively have ended his artistic career. This created a moral dilemma for Dumile; if he stayed until his child was born, he risked being arrested.

Lionel Ngakane notes:
… Dumile failed to convince the authorities that being an artist was a profession and he was eventually expelled from Johannesburg and sent back to Cape Town. In Cape Town he was given fourteen days to leave and was endorsed to his town of birth, Worcester. Worcester also refused him a resident’s permit and in turn gave him fourteen days to leave, or be arrested and sent to a tribal reservation. Dumile in desperation returned to Johannesburg and applied for a passport to leave the country. He had to wait for a year before he was granted the passport. (Ngakane, Lionel. Dumile: A Profile. African Arts/Arts de Afrique 1970 volumeIII).

As a result of Bill Ainslie’s intervention Dumile received an invitation to exhibit at the Grosvenor Gallery and eventually acquired a South African passport.

The emotional turmoil he experienced in the first months after his arrival in England, heightened by the birth of his child in South Africa, is evident in the dramatic power of the work he produced during this period. An inscription on one of the drawings in the series of 5 starts with the question, “What shall we name the child: …”. His daughter, Marriam, was born on 28 September 1968.

When Dumile arrived in London he stayed with the exiled writer, William “Bloke” Modisane, who provided him with studio space. He dedicated one of these early drawings, Theme for Bloke, later shown at the Grosvenor Gallery, to him.
This collection of drawings consists mainly of figurative studies, predominantly of women in postures of anguish, ranging from a single female figure who appears to be running out of the picture frame, to a more complex composition of nine figures.

The scale and positioning of the figures fully utilize the large paper format, where open space is used for dramatic effect, emphasizing the isolation of the figure or figures in the composition.

The empty spaces are devoid of references to landscape or any other pictorial devices that define space, much like the Bushman paintings in the caves that his mother showed him as a child.

These drawings are minimalist in composition, but not in execution, and some figures are more detailed than others. The contrast between the intensely detailed figures, and the open spaces, heightens the tension in these unusual compositions.

Some figures are static, while others are set in motion by the use of fine lines ghosted onto the paper, which suggest various stages of sequential movement.

By 1969 Dumile’s approach to figurative subjects had changed, and his figures did not have the same mass as in his earlier drawings. He did, however, retain the use of fine lines to outline his subject matter and convey movement. Thereafter, his drawings became progressively stylized, although he never relinquished his use of the fine lines. This stylistic development included a solidification of the outlines of many of his figures.

In the context of Dumile’s oeuvre, the dramatic emotional events of 1968 - his displacement to London and his absence from the birth of his child - influenced his stylistic development during this transitional period. This resulted in a body of work which is unique, not only in terms of the stylistic approach to volume and mass, but also because of its specific emotional content.

In 1967 and 1968 Dumile completed a number of large scale charcoal drawings while staying with Bill and Fieke Ainslie at their Johannesburg home where he had a studio. Man drinking dates from this period.

Ainslie, interviewed by Steven Sack in 1988, remarked that Dumile did his best work during the two years he stayed there. He also said that Dumile regularly “binged outside of his work”.

Dumile must have realized, however, that excessive drinking was detrimental to his productive output, and Man drinking, which ostensibly depicts a man on such a binge, could well be a self portrait. The left arm and hand of the drinking figure is drawn simultaneously releasing the bottle, as well as raised upwards, as if in supplication. The head of the figure, which is detailed and highlighted with white conte, is also raised upwards, not only to drink, but to reinforce the gesture of supplication. Three vessels, of varied size and design, convey the notion of excess. The dancing figure in the background is drawn as if intoxicated. Although the upper half of the torso is defined, the lower half is left unresolved with fine ghosted lines suggesting a seated posture.

Although this drawing is less finished than others produced in the corresponding period it is typical of the large scale charcoal drawings that Kentridge would have seen when he attended evening art classes at the Ainslie home as a twelve-year-old. Kentridge has since acknowledged that seeing drawings such as Man drinking made him realize the potential of charcoal used on a large scale as a powerful medium of expression.