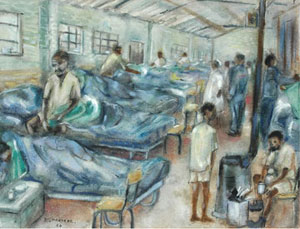 An exhibition of paintings by Ephraim Ngatane was shown at Johans Borman Fine Art Gallery to accompany the launch of the book ‘Ephraim Ngatane: A Setting Apart’ on 26 August 2010.

WE ARE HERE TONIGHT TO CELEBRATE THE LIFE OF EPHRAIM NGATANE.

It was a short life filled with hardships, passion and drama, but it was a successful life, and one which he led to the full. This success is reflected on the walls around us where the artist has captured the essence of his times – Soweto in the 1950’s and 60’s. The book, which I am launching tonight, shows that the artist captured his era with a love of life and an ability to convey his innermost feelings in paint.

Tonight I would like to pay tribute to a few people who contributed greatly in assisting Ngatane in his lifetime, and perpetuating his legacy after his death. I will give you a few brief autobiographical details and take you to Soweto to meet his family and friends in order to add a human dimension to the drama. At the risk of sounding melodramatic, there have been several eerie and extraordinary co-incidences in my encounter with the Ngatane spirit, beginning with the date Johans has chosen for the book launch. This is the week that Ephraim was born – on August 22,1938. On Sunday he would have been 73. Tragically Ephraim died before he reached the age of 33.

It was almost 2 years ago (on September 3rd 2008) – that I arrived in Cape Town to meet Cecil Skotnes to talk about his student, Ephraim Ngatane. I felt Ngatane’s presence palpably that afternoon. When I showed Cecil the pictures of Ephraim’s work, the floodgates of memory opened and Cecil seemed transported to the past. It was a precious afternoon, sitting in his studio, reminiscing about the old days. A few months later Cecil passed away, so I was grateful that I had been able to record his memories. So the first tribute tonight is to Cecil Skotnes – Ngatane’s teacher, and the man who meant so much to many of us in the art world. After completing high school in Soweto, Ngatane turned to the Polly Street Art Centre in downtown Johannesburg for his art education. Skotnes recalled that Polly Street was a place which flourished despite the rigors of Apartheid, and it was a place which discovered and nurtured the talents of many black artists who had nowhere else to go.

“We soon discovered that painting was not just a hobby for Ngatane, but rather a way of life. I feel that Ngatane stood out amongst the other students because of his ability to use abstraction, and his desire to innovate with different techniques. I believe that Ngatane put his ‘thumb print’ on South African art.” he said

Skotnes opened several of Ngatane’s exhibitions, and once Ngatane began exhibiting his work, his paintings quickly became sales successes. Black artists struggled under Apartheid, as they did not have regular jobs and therefore no passes. Most of Ngatane’s contemporaries survived by selling their paintings for around R100 each, but Ngatane’s artworks often went for more than R200 a piece at that time.

In 1964, ‘Our humble homes’ became the first of Ngatane’s artworks to be acquired by a public collection when it was bought by William Humphreys Art Gallery. Today, his works feature in a number of South Africa’s most prestigious public, private and corporate art collections. Ngatane’s last exhibition before his untimely death in 1971 took place at the Champs Elysee Gallery in Hyde Park, Johannesburg. Bill Hargreaves, who opened the exhibition, remembers “The gallery overflowed on the opening night with people on and under the steps. The paintings sold very well, some of them going for as much as R750.”
To a small group of art lovers and collectors, Ngatane remained an important and valuable artist. His influence remained alive, as he had been responsible for teaching artists like Louis Maqubele, Dumile and others. He was always included in general publications and major group shows but there was no one source documenting his work. To the wider and younger art circle, he was unknown.

Thus, the second tribute of the evening is to Greg Blank, who recognized the need to produce a publication documenting Ngatane’s life and artistic contribution, and set about to achieve this. Artist and writer, David Koloane, and I were invited to co-author the book with Rory Bester, who also served as the editor.

Greg recalled that he was a young boy of 8 or 9 when Ngatane and other artists used to come around to his home with their paintings wrapped in newspaper. Greg’s father would always buy the paintings, and they acquired a large collection of his works. It was only when Greg was an adult that he began to appreciate the artist’s special qualities.

Although many artists of that time used the township as their subject matter, what set Ngatane apart was his approach – he used abstract, geometric shapes, and a wide spectrum of colour to create compositions that are both aesthetically appealing, and emotive.

The style of Ngatane’s work ranges from documentary realism to abstract painting, but it is always distinctively his own, and focuses on the gritty reality of township life.

The next tribute is to the Standard Bank Gallery for providing the showcase for a major retrospective exhibition of Ngatane’s work. I was appointed to curate the show, Ephraim Ngatane: Symphony of Soweto, that opened in Johannesburg in February 2010. Eerily, the show ended on March 14 – the day of the untimely death of Ngatane in 1971, almost 40 years before.

The works on the show are all reproduced in the book, Ephraim Ngatane: A Setting Apart, plus an additional 30 paintings.

The response to the show was heartwarming, with many people telling me how much the works moved them – but also admitting that they had never heard of Ephraim Ngatane.

A lasting example was the response of David Smith, art critic for The Guardian (UK), who wrote:

“Last weekend I arrived at the Standard Bank Gallery, 90 minutes before the end of its latest month-long show, Ephraim Ngatane: Symphony of Soweto. I’d never heard of Ngatane and didn’t know what to expect. It was one of those wonderful moments of blowing the dust off buried treasure.

“He was nicknamed the “Hogarth of the township”. I could see why. This retrospective featured his acutely observed images of music, sport and social life in Soweto in the 50s, 60s and early 70’s.

“Ngatane walks that tightrope from which many fall. He captures the warmth of township people, even with a tinge of nostalgia, yet never glosses over the hardship and degradation represented by shacks, dirt roads and stray dogs. He eulogizes the poor but never glamorizes poverty.”

This was a wonderful, unsolicited testimonial from an objective critic with no preconceptions of the artist’s work.

I opened the Natalie Knight Gallery 1980, and therefore I had never met Ngatane. In researching for the book, and in preparation for the show, I spent several days in Soweto with Rory Bester and David Koloane. David introduced me to Sipho Ndebele, an artist who met Ngatane in 1965, and regarded him as his mentor and soul brother. The visits to Soweto with Sipho made Ngatane’s legacy into something tangible.

Sipho showed us the whole of Soweto 2009, as viewed from the top of the Oppenheimer Tower at the Credo Mutwa Park. We had a 360-degree view of a township that Ephraim had never seen. We wondered how he would have interpreted the multicolored rooftops, and the small, solid-brick structures close together in tarred roads.

He would have been amazed to see the large steel and glass Orlando Stadium that cast a dome-like shadow over the Mooki Memorial School – where he spent his days as a young scholar. The school was in a state of disrepair and the murals painted by Ephraim for his teacher, Mrs. Mooki, were lost under layers of paint. The walls were painted in a dark blue, designed to obliterate the past. Underneath the cracked and peeling surface was Ephraim’s early work, which fortunately had been photographed by Eliza Miles in her record of artists in her book on Polly Street. Two of Ephraim’s frescoes in the adjoining Church were still there – a testimony to his presence and burgeoning talent.

We drove across Soweto, starting in the Moroka area where Ephraim had lived and worked, looking at the scenes where Ephraim and Sipho had set up their makeshift easels despite opposition from gangs and policemen.

Sipho said, “The Township had an atmosphere and the dirt and the smell came out beautifully.”

A visit to Ephraim’s parental home in Mapetla East revealed a small house. In pride of place was a photo of Ephraim that his sister, Mamoeti, showed us. She was only 15 when her brother died. Ephraim’s daughter, Pabello, was five, and his son, Tshepo, was a few months old. Their mother had been killed the previous year in a car accident, and they were brought up in that house by their grandparents. We sat around the dining room table and talked about the man that only Sipho really remembered.

Tshepo, now a man of 40, told me that he knew that his late father had been an artist but he had not seen any of his works. He and his sister were very excited when we gave them each a copy of the book, and they looked through it in amazement at their father’s creativity.

They were also delighted when we gave them each a set of framed prints from the portfolio, Ephraim Ngatane: His Moods and Memories. A limited edition of 50 portfolios of 6 giclee prints have been reproduced with an embossed signature of the artist, authenticated and hand numbered with the seal of the Ngatane Foundation. The family also received a contribution from the sales of the portfolio to assist with their children’s education.

The prints have been printed on archival German etching paper, and offer an opportunity to collectors who are not able to buy original paintings. They are available this evening, and 10% of the sales will be given to the Skotnes Trust Fund at the Michaelis School of art to assist artists in need of art materials.

Tsepo was particularly excited to receive the portfolio, as he said that one of his young sons had shown artistic inclinations and had considerable talent. It would be a great outcome if we were able to facilitate the art instruction for a grandchild of the late Ngatane as a result of this initiative.

The final tribute for the evening goes to Johans Borman for providing an exhibition of such high quality, and his constant support of the artist. Johans described his admiration of artists who revealed the heroism required at all levels of the creative process. Our thanks are due to Johans for tirelessly recording this heroism, and for his perseverance and courage in the art world.

Through his art, Ngatane portrayed life in Soweto: emotions spanning from despair to hope, the soul of the township, its beggars, bicycles and barbershops, and the wind, snow and sun.

All these moods and emotions are captured in the hard cover book Ephraim Ngatane: A Setting Apart, printed in a limited edition of 1000 copies. I am proud to be part of the book because it is a lasting tribute to an artist of great ability who deserves a prominent place in the history of art in South Africa.