Philip Barlow - the colour of light 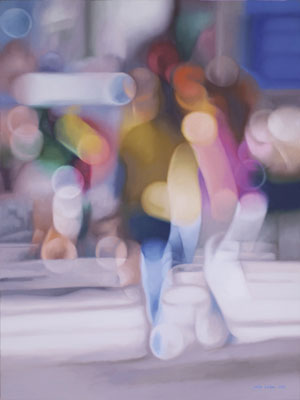 broadway at ten
A solo exhibition of oil paintings by Philip Barlow will be hosted from 31 October till 23 November 2013.

I am fascinated with colour and its relations with itself; with gradations of colour,
and within gradations the beauty of subtlety;
with the relationship between light and love. – Philip Barlow (3)

Barlow describes his work as a step towards abstraction. His images are not defined to the degree where all is given away. It is a step into a realm that is other, but at the same time, I take the viewer with me. The elusive quality of the images lies, in part, in the melding of Realism and abstraction, inviting new ways of seeing. The play of light moves us from a seemingly ordinary moment of time, to a transcendent doubling of the meaning of illumination: at once to see with clarity and as a reflection of the artist’s deeply felt sense of the divine aspect of light. The softly diffused outlines in the paintings alert us to the illusion of clear seeing: When we see the world around us, [w]hat we get on the retina …is a welter of dancing light points… What we see is a stable world. It takes an effort of the imagination and a fairly complex apparatus to realize the tremendous gulf that exists between the two (4). It is this effort of the imagination that is the realm of the artist. For Barlow, the relationship between the human eye and the photographer’s lens forms part of the complex apparatus of his imaginative representations of glimpses into a place in time. The blurred focus enabled by the camera lens stimulates new understandings of forms, and relationships between people and place. The world of stability we create may often harden, imperceptibly, into alienation and lack of insight.

Barlow works within a long tradition of artistic engagement with photographic images. He has spoken of his excitement in noting that in Vermeer’s paintings, there are no hard edges. Vermeer did not simply copy the camera obscura image, but modified light and the shading of outlines to reflect a philosophy of harmony (5). In Barlow’s images, the outlines soften and blur into fine gradations of light and colour. Like Vermeer and Constable before him, he looks for how the fall of light reveals form with an eye to the shaping of harmonies. In the beach settings, the fall of light and diffused outlines create an unusual theatre of human life. The attention shifts to a focus on the language of gesture – the flirtations, conversations and glances become the shared human story. The fine diffusion of outlines connects the human figures with the play of light on the sea and sky; environment does not recede into mere background. The philosopher A.C. Grayling describes Vermeer’s work as the poetry of light (6). If poetry suggests an attention to the complex relationship between form and meaning, then we might consider how in Barlow’s work, the poetry of light carries a metaphoric weight. The artistic interest in the fleetingness of time, suggested in many of the titles – ‘ten fifty’, ‘flurry’, ‘transitory’ – suggests not the anxiety of loss, but what is significant for the artist: a sense of wonder. The changing effect of light reflects the passing of time, but the sparkle also transfigures, so that the mundane, pedestrian scene blazes for a moment into an unexpected harmony. Barlow makes minimal changes to the digital image, usually heightening the effect of light. In ‘riebeek at six ten pm’, the intense ultramarine sky, suffused with light softens the dark monolithic buildings; the colour, symbolic of transcendence in early religious paintings, turning the usually grubby street into a thing of beauty. In ‘relations I’ and ‘relations II, the artist transforms a single image of a couple in a street through the use of contrasting colour palettes of cool and warm tones. The changing colours suggest the shifting stories carried by people, and how changes in light affect our perception of tone, and feeling. How light absorbs and reflects colour is a point of fascination in ‘elapse’ where the strong ochre of a woman’s garment tints sunlight thrown unnoticed in the hurry of lives, to lie softly on the people behind. To make manifest these almost invisible forms of connection is central to Barlow’s art. In ‘broadway at ten’, he has chosen to straighten the angle of a connecting beam of light to echo the lines of the zebra crossing below. These reflective harmonies and the play of light melting the geometric lines of the crossing draw us to the subtle ways in which people imaginatively transform the ordered space of the city. The crossing place is a metaphor of potent transformation. Barlow’s paintings become crossing places for new visions of the ordinary, the seen-but-not-seen, as filled with the potential for wonder. If the play of light is momentary, the work of art requires from us a quiet, contemplative attention to such potential. The effect on the viewer is far from fleeting – it lingers, felt as something rich and strange.

The speaking richness of Barlow’s attention to colour reflects his skill in the art of stained glass. The fine, translucent shading of intense pigments tempered with white creates in the night lights of ‘west 43rd street’ glowing embers of colour, pushing light out of themselves, reminiscent of Gerhard Richter’s stained glass window for Cologne Cathedral where, through the play of light, the grid of colour becomes fluid, alive with movement, a deeply touching memorial to loss and new hope (7). The transfiguring effect of light through glass is found too, in the portraits where light falls from windows onto the sitter, raising interesting questions about portraiture. In ‘brighter’, we are invited to a sense of a person of quiet strength, with a rich inner life, through the warmth of colour. The meditative repose of a reader and her intimate connection with the painter are enhanced by the circles of light gently touching the nape of the neck. The play of light on her glasses however, does not allow us to fall into easy assumptions about portraits laying bare for us the complexity of a self. In ‘inside out’, the oblong, almost geometric shapes of light obscuring the throat make us pause, similarly. Where Cubist portraiture provocatively, some would say, violently, shattered perspective, the effect of abstraction here is a gentle invitation to explore the face in other ways than one would look at a normal portrait. We are reminded, in Philip Barlow’s art, that we see through a glass darkly.