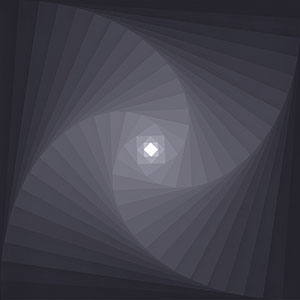 The most colourful thing in the world is black and white, it contains all colours and at the same time excludes all.
Vikram Verma

Black and white offer a highly visual contrast, and are widely used to depict opposites. In Western culture, white and black traditionally symbolize the dichotomy of good and evil, metaphorically related to light and darkness, and day and night.

In Chinese philosophy, the circular black and white ‘yin & yang’ symbol is based on a sun chart which was plotted measuring the changes in the length of the sun’s shadow over a period of one year, creating the ecliptic light and shadow shapes inside the circle. The yin and yang concept describes how apparently opposite or contrary forces are actually complementary, interconnected, and interdependent in the natural world, and how they give rise to each other as they interrelate to one another in their pursuit of balance. Many tangible dualities such as light and dark, fire and water, and male and female are thought of as physical manifestations of the duality of yin and yang.

When we engage with a work of art, the underlying concept of balance in its composition is usually not that obvious, but can be critical in determining the success of the work. Physically and psychologically, we are hard-wired to observe the contrast of light and shadow, good and bad, and black and white in the way we experience our daily surroundings. Such experiences usually confirm the complimentary and interdependent forces, or the contrasting opposites of our world.

Black and white, together with ochre, were the first colours used in art. Dating back 33,000 years, the paintings of animals in the Lascaux Cave in France stand as evidence of this. In 2002, a new discovery was made when a piece of ochre decorated with a delicate geometric pattern was found on the southern Cape coast. The piece is conservatively estimated at 77,000 years old – it was made before any modern human had walked in Europe. The long argument about the site of the origin of art seems now to be drawing to a close: Africa is not only the cradle of humankind, but seems also to be the place where art as we know it began.

Using charcoal for contour lines and calcite or chalk to fill in the background and create highlights, Palaeolithic artists used what was readily available to them to document their lives and immediate environments. Whilst carefully depicting their rituals and ancient animals they were unaware that by placing these opposite hues next to each other, they were creating the first works of art – the white reflecting light, as it was later discovered to be the combination of all colours, and the black absorbing light, in the absence of colour.

These early rock artists were definitely unware that the soot and charcoal on the rock, later to be described by the Old English word blæc (“black, dark”, “ink”), would come to be associated with power, elegance, fear, evil, unhappiness, depth, style, sadness, remorse, anger, mourning and death. Nor would they have foreseen that the chalky powder, to be described by the Old English word hwīt, (“to be white or bright”,”light”), would later be associated with purity, simplicity, peace, humility, precision, innocence, youth, goodness, sterility and marriage.

They discovered that by placing these contrasting colours next to each other one could create the illusion of three-dimensional form, physically reproducing what the eye saw. They were the pioneers of visual art – by exploring this interplay, they paved the way for millennia of artists who have since explored the endless possibilities of black and white to create a visual illusion.


When we analyse any work of art in monochrome, the potential contribution of colour to its compositional harmony and balance is negated, and any flaws become much more obvious. We can therefore argue that by viewing an artwork in black and white, we are experiencing the essence of such a work without the compositional assistance that colour may offer.

The inspiration to curate an exhibition of this nature is not only motivated by the philosophical and art historical aspects, but also by the opportunity to include many different media – particularly drawings, which are so often overshadowed by the visually stronger media of painting, sculpture, graphic art and photography.