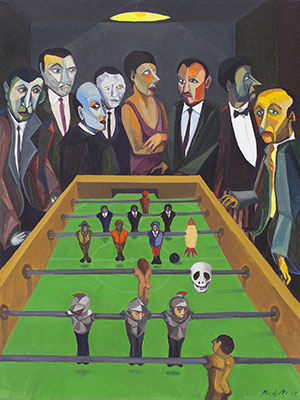 Business and pleasure
A solo exhibition of paintings by Richard Mudariki will be hosted from 8 to 29 March 2014.

African contemporary art is attracting more attention than ever before as museums, dedicated art fairs and auction houses focus on ‘emerging’ artists from the continent, adding a wonderfully fresh genre to the global art scene. International collectors appreciate the diversity and authenticity that contemporary African artists offer, while African collectors prefer to collect art that they can relate to on a cultural and social level. This interest in African art was highlighted in 2013 when Angola, exhibiting for the first time at the Venice Biennale, was awarded the prestigious Golden Lion for the best national pavilion. This recognition of the importance of ‘Africa’ in the global arts scene is further emphasised by the appointment of Nigerian born Okwui Enwezor to direct the 2015 Venice Biennale.

Richard has been working hard since his first solo exhibition, My reality, in June 2012, and has consistently produced unique works of his normal high standard. A small number of these works have been featured at curated exhibitions in South Africa and London over the past 18 months.

Following his sell-out solo exhibition, some of Richard’s works were included in the Museum of Modern Art Equatorial Guinea’s (MOMART-EG) exhibition at the 2012 FNB Joburg Art Fair. Richard’s paintings attracted some very exciting international coverage from the foreign press, including, AP, CBS and ABC news in the USA, as well as publications such as Newsday (USA) and The Guardian (UK) amongst others.

Richard’s success continued in 2013 when his autobiographical painting ‘Mukwirikwiri (foreigner)’, was selected as one of the top 40 finalist paintings (from 1783 entries) in the Sanlam Private Investments National Portrait Award in August. The painting is part of this touring exhibition which has thus far been shown at the University of Johannesburg Art Gallery and at Stephan Welz & Co at the Alphen Estate in Constantia, Cape Town. It will be hosted by the KwaZulu-Natal Society of Arts during April 2014.

Three of Richard’s paintings also formed part of the In the Shadow of the Rainbow exhibition, curated by Johans Borman Fine Art (JBFA) for the 2013 FNB Joburg Art Fair in September. This exhibition juxtaposed artworks by SA masters such as Gerard Sekoto, George Pemba, Peter Clarke and Sydney Kumalo against those of contemporary artists such as William Kentridge, Guy Tillim, Brett Murray and Pieter Hugo. The objective with this exhibition was to draw attention to, and stimulate debate on, issues such as cultural differences, economic inequality, racial prejudice and the everyday realities of the Rainbow Nation and Africa.

October 2013 saw Richard’s major large scale work, ‘The Last Judgement’ (in the collection of MOMART-EG), exhibited at the inaugural edition of the 1:54 Contemporary African Art Fair at Somerset House in London, and Richard was interviewed live for television by the Voice of America. Showcasing the best in African contemporary art, this show brought together 15 exhibitors from Africa and Europe to present over 70 emerging and established artists. MOMART-EG’s exhibition focused on highlights from its permanent collection, showcasing artists from a number of African countries, including Zimbabwe, South Africa, Senegal, Benin and Equatorial Guinea among others. It is no surprise that they received excellent international media coverage.

Richard’s painting ‘Coup d’état’ was the first of his artworks to be offered at auction by the Auction Room in London, and sold for well above its estimate. Their African Art Auction: Contemporary and Modern Art from Africa and the Diaspora, which took place on 18 October 2013, was curated by the African Art specialist, Ed Cross, and included a carefully selected range of artworks for the appeal of various collectors. Artists featured included El Anatsui – one of Africa’s global ‘superstars’, Nigerian master Twins Seven Seven, George Lilanga, Goncalo Mabunda and Peter Clarke.

2014 promises to be another exciting year for Richard. He has submitted a painting for the Suidoosterfees at Artscape in Cape Town at the end of January, participating in one of the first events on the calendar of the World Design Capital 2014 program. New works will be shown by JBFA at the Cape Town Art Fair at the end of February.

The London-based auctioneers, Bonhams, have also accepted Richard’s painting titled ‘Big fish eats small fish’ for their May 2014 Africa Now auction of contemporary and modern African art. Given the success of Richard’s painting at the Auction Room sale, this is another opportunity for the art world to take note of his exceptional talent, and for his unique voice to be heard.

Richard is also planning to show a selection of new works at the 2014 FNB Joburg Art Fair at the end of August in Johannesburg. This will be the first time that he exhibits a body of work at the fair, although it will be his third appearance.

For any young, ‘emerging’ African artist times cannot be more exciting or promising. Contemporary African art is in the world spotlight, and it most definitely is the dawn of a new era. Cape Town will also certainly benefit from the new Zeitz Museum of Contemporary African Art at the V&A Waterfront planned to open in 2016. As curator Mark Coetzee states; We want to use this institution to connect our artists with the rest of the world… and vice versa.

This second solo exhibition of Richard Mudariki, titled Open Agenda, contributes to the international dialogue around African art – it examines various socio-political themes, and is an interpretation of the times we live in. The paintings in this exhibition raise issues ranging from rape, terrorism, corruption and social unrest to neo-colonialism. These artworks facilitate dialogue that critically evaluates and questions our behaviour as a society; they encourage debate, and leave us with much to contemplate.