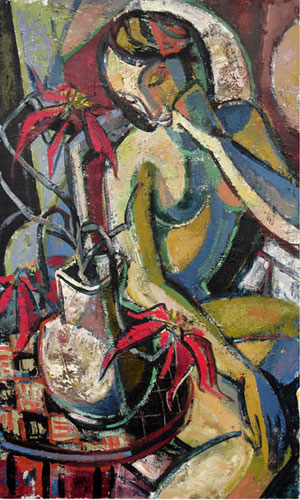 It is such a joy and a privilege to witness any creative process where talent, skill and conceptual ingenuity are applied to produce a unique result that captures our minds and emotions. Art lovers will all agree that it is the mystery of this process and the intrigue of its emotional and pshycological impact that provides the excitement and fascination which keeps us coming back for more.

We have promoted Hennie Niemann Jnr’s work for 15 years and feel privileged to be so closely involved in the development of this very talented painter, and well grounded young man. During the early years, critique sessions were very diplomatic meetings which were handled with finesse, but over time, this honest and respectful approach by both artist and gallerist has laid the foundation for a very trusting and rewarding relationship.

Hennie’s focus on quality and his commitment to a sustainable long term strategy regarding his output and pricing has served him well. At present, a Niemann Jnr painting normally sells for much more at an auction than in any gallery - a phenomenon almost unheard of in the South African contemporary art scene. However, this is only indicative of the desirability of his work, as the true test of success lies in the quality of the paintings and the growth he has shown as an artist. Fortunately, Hennie has always chosen a style and subject matter that he finds exciting and inspirational at any given time thus avoiding the pitfalls of a repetative commercially oriented strategy. Stylistically, he has developed from an early earthy, expressive Krampe influence in his energetic wildlife studies, to a much more stylized style influenced by Van Essche and Picasso, to his current Fauvist inspired approach. The positive aspect throughout his development has been the establishment of his distinctive style and technique, irrespective of subject matter, which underpins the uniqueness of his oils.

Inspired by a trip to Spain last year, he has offered us a change of subject matter in the bulk of the paintings selected for this exhibition. Hennie’s 2006 solo exhibition focussed primarily on the African people he encountered on his travels through Southern Africa, but his focus has now shifted to dark haired Catalonian girls in vibrantly colourful interiors, and local variations on this theme. The overriding impression communicated in this set of paintings is that of a very painterly approach where the mark-making and palette generates drama and excitement beyond the sultry moods of his mysterious models.

All art lovers are invited to indulge themselves in this feast of colour and the passionate display of technical mastery.