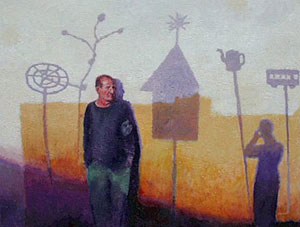 A comprehensive selection of Cape artist Ben Coutouvidis’ atmospheric impressions of the Karoo, titled ‘Great Karoo’, was exhibited during August 2004 at the Johans Borman Fine Art Gallery in Cape Town. This was Coutouvidis’ first solo exhibition after having participated in several group exhibitions during the past decade in South Africa.

Through the years he has become known for his powerful landscapes; initially his representations of the Eastern Cape, but now primarily the Karoo, particularly the scenic town of Prince Albert and surrounds. His painting style varies from virtually super-realistic studies of early Karoo architecture to more impressionistic and even expressionistic vistas of the natural landscape. A prominent feature of his work is the interplay of light and deep colour, where form often dissolves into an almost abstract composition.

After Coutouvidis completed his arts studies at Rhodes University with distinction in 1993, he regularly exhibited at group shows in Cape Town and Johannesburg, as well as at the National Arts Festival in Grahamstown. In 1996 he was awarded the Raymond Pullen Scholarship for painting. His work has been acquired by various collections, including those of the Rhodes University, ABSA, Barclays International and General Cologne.