In the Shadow of the Rainbow 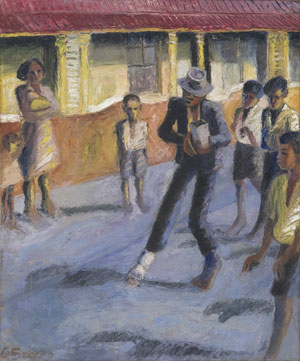 To view the works on exhibition please click here
To download (and save) the In the Shadow of the Rainbow catalogue click here
Hard cover catalogue available from Johans Borman Fine Art at R250 each.

The term Social Realism originated in the USA around 1930 when American painters of the Depression era started exploring themes such as joblessness and poverty, political corruption and injustice, labour-management conflict, and the excesses of American materialism. It was introduced into South African art practice from the late 1930s by predominantly black local pioneers such as Gerard Sekoto, George Pemba, Sydney Kumalo, Dumile Feni, Ezrom Legae, Ephraim Ngatane and Peter Clarke who reflected on the social, economic and political realities of their time. These artists were all directly affected and influenced by the segregation of South African society and the impact that Apartheid had on their communities. They drew attention to, and commented critically on the everyday conditions of the working classes and the poor, while questioning the socio-political structures that are responsible for – and perpetuate – these conditions.