Artist Statement:
“For me, art not only evokes memories and contemplation of the loss of home but it also encounters the present and shapes

the future. My work is the product of a rich heritage from my origins in Sudan, my training there and my recent diasporic experience.”

“As a Sudanese, my past and present are marred with memories of loss, isolation, migration, exile and forgotten heritage.”

“In the 1970s and 1980s, Sudanese artists and their critics engaged in a dialogue on the significance of artistic heritage in relation to contemporary Sudanese arts. I was a witness, if not a participant, in this exciting, stimulating period in Sudanese intellectual life which in turn significantly influenced my identity and style of work today.”

Opening address by Prof. Terence King at Hussein Salim’s exhibition in October 2006 at the Centre for Visual Art, University of KwaZulu Natal, Pietermaritzburg:
Hussein Salim’s work, at once spare and welcoming, is a response to histories, recent and old, to personal circumstances and social upheaval.

Artistic responses to circumstances and stimuli such as these will take many varied forms. Compare for example the quiet dignity of Morandi asserting the sheer beauty of painting in the face of fascism with Picasso’s dramatic and expressive reaction to the bombings of the Spanish Civil War. (And I refer here to two European artists intentionally because Hussein, as a consequence of the Sudanese situation, has ironically had the opportunity but also been required to travel and work elsewhere in search of supportive environments.)

In this admirable enterprise, to respond to, reflect on and to tell us about his circumstances, physical, political, personal and artistic, what specifically does Hussein paint?

He paints literal and sometimes very clear signs of where he comes from. These might include the colours of fabrics and of sands, (and even physically incorporate sand), and the styles of the architecture. The expansiveness and the evenness of the terrain and the intensity of the light are all there. In this, Hussein becomes an ideal chronicler of the look and feel of the place where he is from, because he is such a dedicated observer. He hands us the information but then expects us to work with that information and bring our experience to bear too on the interpretation of the clues given.

These paintings are not simply representations of the light and the surfaces and the events of his experience, but a dynamic reinterpretation of those experiences which encourages spectator engagement; we will all, in different ways, have similar sets of experiences and memories to those depicted here and so will different chords be struck in each of us.

The content of Hussein’s work is, it seems to me, only in part what he chooses to paint and what he invites us to recognise – it is, in large measure, about the act of painting.

Hussein’s application of paint and the incorporation of drawing into painting, while gestural and spontaneous in appearance is not superficially expressive. There is a studied sense of contemplation in the control amid the disorderliness, the archaeology of the painting beneath the designed surface.

Hussein’s painting is essentially an account of moments personally recollected. (It may be that all painting is ultimately autobiographical.) When Hussein tackles memorised fragments he paints his own history as an artist. The outcomes are complex – they look ahead in their reference to creative growth and reflectively or historically to the imagery of past experience. 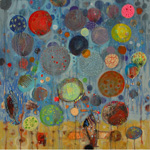 The picture surfaces of Hussein’s painting are themselves small galleries or studios, mostly flat, close to the viewer’s space with images placed on them, rather like objects collected over time and tacked to the notice boards. This gives Hussein’s surfaces an arena-like quality, as if a tableland viewed from on high where the events are not so much played out as temporarily stopped, for these are unhurried events which sometimes dissolve before us into what might be desert sands or might equally be shadows enveloping their objects.

This territory of memories is rendered on the canvasses by a demarcation of real territories and real spaces; the ways in which humankind and history divide spaces, cut up the landscape, raise barriers, are all there, giving an organising geometry to the compositions. 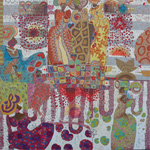 This exhibition contains a wealth of ideas, held in a precarious balance by simple planes, formal grids, a controlled overlap of the textured panels and multi-format compositions, and I would like to conclude with a quote by art critic, John Russell on another painter’s work, which seemed to me entirely apt for Hussein’s painting: “They are on record, full and true, of one man’s negotitions with painting. To spend a morning in such company is to prize, all over again, the dignity fo painting.” (Russell, 1974)

Hussein was born in Karima, Sudan in 1966. He lives in Pietermaritzburg with his artist wife, Raja, and their two children.

Back to artists page
Back to Contemporary Artists