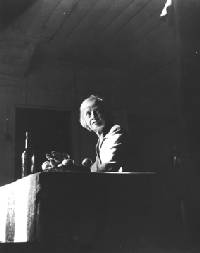 Ruth Prowse
Ruth Prowse was born in 1883 in Queenstown in the Eastern Cape. Her early years were spent on a farm on the slopes of Devils Peak in Cape Town with her English immigrant parents. Between the years of 1902 and 1908, Ruth spent her time studying abroad at various institutions, namely the Slade School and Royal Academy in London and La Palette in Paris.

Upon her return to South Africa in 1908, she began to teach art in Cape Town. It was in 1909 that she was elected as a member of the South African Society of Artists. Three years later, in 1912, Ruth moved to Paarl.

Ruth Prowse spent the years 1923 to 1925 in England on a study visit. Three years after her return, in 1928, she was appointed as the keeper of the Michaelis Collection in Cape Town. In 1938 she went on another study visit, this time to Europe and spent time doing research into the preservation and restoration of art.

A founding member of the New Group, she was appointed chairlady in 1952. She subsequently served on several advisory and selection committees. Ruth Prowse worked vigorously for the preservation of historic buildings. From 1948 until 1957 she served as the trustee of the South African National Gallery in Cape Town. It was in 1959 that her tireless efforts were recognised when she was awarded the Cape Tercentenary Foundation Medal for her work in preserving historical buildings.

1965 sees her awarded the South African Association of Arts Medal of Honour for her contribution to South African Art. It is also during this period of her life that she becomes a life member of the Simon van der Stel foundation.

Ruth Prowse died in 1967. She bequethed her home, ‘The Retreat’ in the historic Roodelbloem Estate in Woodstock, Cape Town, for use as an art centre. The gift was not accepted by the local or provincial authorities, and the gesture would have been fruitless had it not been for the efforts of Erik Laubscher, who in 1970 formed a committee to undertake the project of opening the Ruth Prowse Art Centre. The centre opened just one year later with Laubscher as its director.

The Ruth Prowse art centre was an immediate success and continues to flourish to this day.