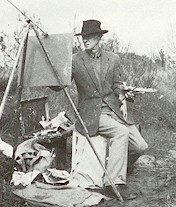 Gregoire Boonzaier
Gregoire Boonzaier was born in Newlands, Cape Town in 1909. He was the son of the political cartoonist, DC Boonzaier, and benefited from the close contact with his father’s artist friends, including Pieter Wenning, Nita Spilhaus and Moses Kottler, the sculptor. Gregoire was given his first paint box by Kottler in 1922, and received an easel from Nita Spilhaus in 1926. DC Boonzaier was strongly opposed to formal art training, and Gregoire’s initial studies were possible through association with these early Cape Impressionist painters.


In 1923, at the age of 14, his first two oil paintings were exhibited at Ashbey’s Gallery in Cape Town - his first successful one-man exhibition would also be held there two years later. Gregoire went on to hold more than 100 solo exhibitions during his extensive career of more than eighty years.

Rebelling against his father’s opposition he set up his own studio in Cape Town in 1934. After successful exhibitions in Cape Town and Pretoria during the following year, he was able to finance his formal art studies in London. He left for London in 1935 to study at Heatherley’s School of Art with fellow artists Terence McCaw and Frieda Lock. His early paintings strongly influenced by the work of Pieter Wenning, Gregoire was now exposed to the European influences of Van Gogh, Cezanne, Utrillo, Braque and Christopher Wood. During 1936 he travelled to several European countries, including France and Russia, and painted in Spain with Terence McCaw. In 1937 Gregoire enrolled in a one-year course with the Central School of Arts and Crafts, concentrating on graphic art techniques.

Gregoire returned to South Africa in December 1937, and as a founder member of the New Group with Terence McCaw, Frieda Lock, Lippy Lipshitz and others, was elected its first chairman in 1938. The New Group rendered an invaluable service to the cause of South African art for almost 15 years. It provided a stage for many younger artists, who on their return from their studies in Europe, found the academicism and conservatism in South Africa extremely stifling. By mounting exhibitions all over the country the New Group created a much greater general awareness of art, and also provided rural areas with the opportunity to see their art, which was so different to the work that had been produced in South Africa until then.

In the ‘30s Gregoire’s style was fresh and forward-looking. This, coupled with competent craftsmanship and subject matter that provided no visual challenges, meant that his paintings found a very receptive market. He was a prolific painter who managed to support himself and his family solely from his art – a fact of which he was always very proud. This high output lead to a highly distinctive style, which has been classified as an exponent of Cape Impressionism. It should be noted that stylistically, his work has a much harder edge than that of most Impressionist painters, and that the subject matter often reflects a strong social awareness. His landscapes are easily recognisable with their ‘squiggly’ outlines, flat planes and dark, accenting forms of trees, as well as a particular way of combining colours - either in the muted, creamy tones of Utrillo, or Wood’s bolder areas of colour. Gregoire tended to experiment most in the area of still-life painting, showing an influence of Braque, and these works often differ in style from his landscapes.

Gregoire Boonzaier used Cape Town as his base, and his work very often offered a social commentary. This is most notable in the hundreds of paintings and graphics documenting District Six and the Malay Quarter (Bo-Kaap) over several decades, serving as a chronicle of its culture and colourful social texture long after the physical reality was gone. Gregoire was one of the first artists to paint squatter camps, and enjoyed drawing portraits of all the interesting ‘types’ - as he referred to the people he would meet on his excursions.

In 1945 he was a founding member of the SAAA and, as a result, became a Trustee of the SA National Gallery for the subsequent six years. Through this position he tried to raise the levels of art appreciation and understanding nationally, and travelled extensively in the platteland, exhibiting and teaching under the auspices of the Department of Adult Education.

Gregoire participated, along with 43 other SA artists, in the ‘Exhibition of South African Art’ at the Tate Gallery in London, 1948.

In 1959 he was awarded the SA Medal of Honour for Painting by the SA Akademie vir Wetenskap en Kuns, and in 1964 the first book on Gregoire and his work, written by Dr F. P. Scott, was published.

Towards the end of his career Gregoire was often annoyed about the fact that most art buyers were only interested in his paintings of District Six, and would always remind them that he painted many different subjects. This led to an exhibition of 100 paintings, compiled by the artist himself, titled ‘Variations on different themes’. This collection of paintings, watercolours, drawings and linocuts, of which none were for sale, was exhibited at the Onrus Galerie, the University of Pretoria, and the Sasol Museum in Stellenbosch during 1993 and 1994. Gregoire had included only 6 District Six works, rather focusing on a broad range of subject matter portrayed in various styles and media that formed part of his oeuvre. These included portraits, self portraits, flower studies, still-life studies, tree studies, rural landscape scenes and interior scenes.

Gregoire Boonzaier died on 22 April 2005, a few months before his 96th birthday, having lived an extraordinary life and productive career, during which he was able to serve as a mentor and teacher to generations of South African artists and art lovers.