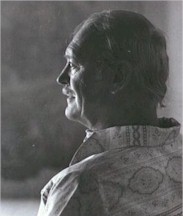 In the foreword to the “Alexis Preller retrospective” catalogue for the exhibition at the Pretoria Art Museum in 1972, Esmé Berman wrote: “Perhaps the earliest and the best-known Preller theme is that woven out of the mystique of Africa. From his observations of tribal life and ritual, from the inscrutable surviving ruins, fetishes and symbols, from the art of the primeval past, he spun a myth awakening a forgotten tribe and called up visions of its origins and gods.”

As an art student under Mark Gertler at the Westminister School of Art in London, where he enrolled on JH Pierneef’s advice in 1934, Preller was fascinated by the works of Gauguin and Van Gogh. His first paintings bear testimony to the impression made by these two artists as well as the influence of Irma Stern.

In the late 1930’s Preller camped in Swaziland and went on safari to the Congo where the exposure to the customs, traditional rites, sculptures and fetishes of tribal Africa stirred his emotions and imagination. This resulted in his formulation of a personal conception of primeval Africa for which he started establishing a compendium of iconographic imagery from which he would extrapolate throughout his subsequent career.

A study trip to Italy and Egypt in 1953 provided the impetus for Preller’s mythography of an imaginary race with its own mystical tribal culture, ancestry, fetishes and symbols. He applied the principles of clearly defined imagery as he had observed in the Quattrocento (15th Century Renaissance) paintings, as well as the cryptic symbolism of ancient Egypt to his own art with profound originality. This resulted in the evocative “Little King” series, the magnificent “Hieratic Figures” of 1955-57 - portraying his visions of god-kings and hieratic castes, and paintings inspired by Dogon sculpture.

Preller attributes the influence of Dogon sculpture to a number of his paintings. The Dogon people live as a reclusive tribe in an isolated region of Mali, south of the Sahara Desert. Believed to be of Egyptian descent, anthropological studies conducted in the late 1940’s revealed extraordinary legends and beliefs regarding Sirius – the brilliant Dog Star, which were later found to be scientifically correct. The symbolic Dogon sculptures were regularly produced as part of the intricate tribal belief system and their complex mythology. Preller’s affinity for these sculptural pieces is therefore obvious, as the symbolism and myth surrounding the Dogon people would have given flight to his imagination to create his personal romantic vision of an archetypal African tribe.

The symbolism which forms such an integral part of Preller’s oeuvre is best explained by Esmé Berman when she writes: “Though the images which make up Preller’s iconography are personal and frequently mysterious, many are rooted in a simple visual perception which acquired overtones and symbolical significance as time wore on. The dividing line between image and symbols is therefore often very narrow; for what was initially perhaps no more than an appealing subject for a painting begins to signify for him a specific phase in his experience, a state of mind or feeling; and ultimately it becomes a metaphor dissociated from its original objective source.”

Preller’s still life compositions bear testimony to the instinctive sense of perfection in every facet of his art. Every painting serves as an example of the absolute command he had of the medium he worked in, the sound structural composition and perfectly balanced palette he favoured, and his ability to create an overall decoratively pleasing result.

He referred to the recurring objects which were either elements, or often the central item of many of his works as ‘household gods’. The masks, the patterned vase, the shells from the Seychelles, the mangoes, the eggs – all were the talismans he relied upon for his artistic inspiration. His repeated use of these images and shapes through adaptation and variation were central to the development and transformation of his themes and the nourishment of his imagination.

Preller’s vast imaginative capacity and his artistic genius were fused into a highly individual style which can not be classified under any of the established art movements. As one of Africa’s leading modern artists of the 20th century, he regarded his objects and style as the metaphors and vehicle he needed to communicate his vision and not as an end in itself.