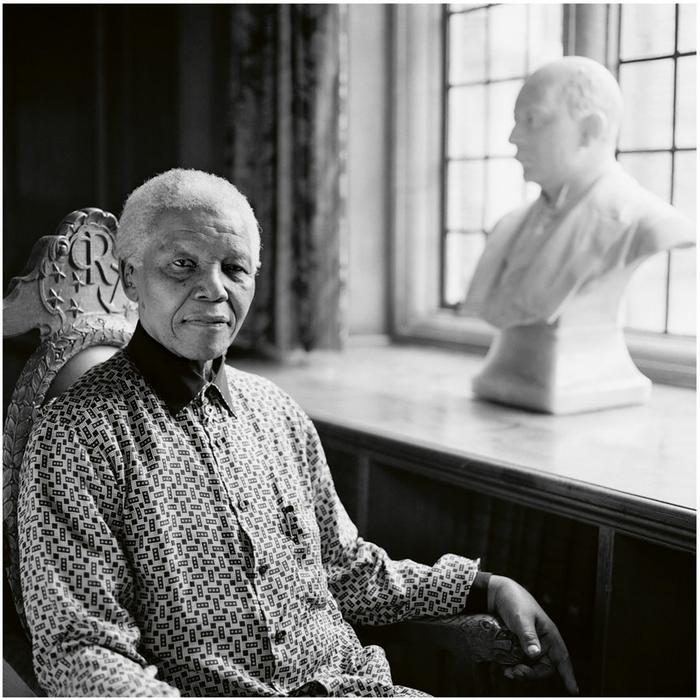 Usually, when photographing very well-known individuals, one has little time - I was allocated 15 minutes to photograph Mr Mandela (Madiba). A considerable amount of pre-planning was done, and assuming it was going to be a fine English summer day in June, we chose the Beit Room at Rhodes House in Oxford as the setting. As Madiba cannot be photographed in artificial light - a result of the eye damage he sustained whilst working on the limestone quarry at Robben Island - we had a bank of reflectors to make the most of what natural light could make its way into the impressive but dark wood panelled room. The closer we came to Mandela’s arrival, however, the darker and more oppressively overcast the sky became. My assistants grew noticeably more nervous, not only because of the weather but also because they were about to meet one of the most famous people on the planet.

Madiba is tall in person, and radiates confidence - on entering the room he immediately set about making all of us feel comfortable, turning on his famous charm. Flattering me, he said the last time he had sat for a portrait was by Karsh of Ottowa in 1990, although I know this was not true. I always prefer to talk to my subjects before photographing them, and luckily Madiba’s PA, Zelda La Grange, and security details were happy to leave us alone in the room with him, saying there was no rush.

That day Madiba was remarkably relaxed and affable, showing an interest in us and our lives. Knowing I had just moved to South Africa, he quizzed me on how I intended to use my photography and other skills to improve the lives of others. There was no escape from his questions or his infectious humour. He turned on the Mandela smile for the camera, amused that he was sitting in Cecil Rhodes’ chair observed by the bust of Alfred Beit, another great 19th century entrepreneur and benefactor who made his fortune in Africa. Madiba did not like it when I asked him not to smile but I was very keen to see the other side of him. Suddenly I was faced by the tough, driven leader hidden beneath that smile, and I noticed the sorrow of an individual whose family had become so damaged because of his beliefs and imprisonment. In that moment, I was faced by a completely different person, and this was the one I wanted to capture.
Marc Stanes
July 2003