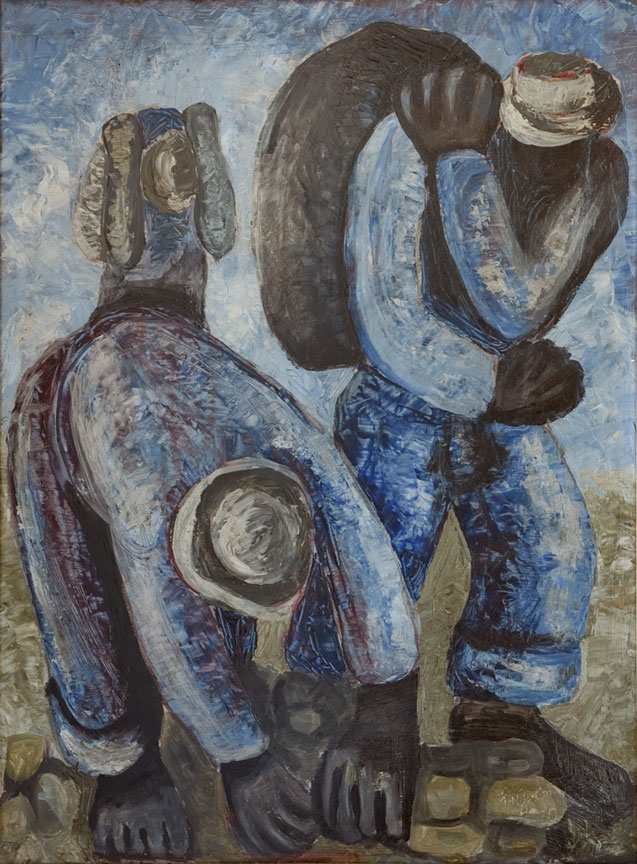 Eric Ngcobo was born near Melmoth in Zululand, where his father was a teacher at the Royal Kraal of Prince Mshiylni Dlamalaha. He obtained his secondary education at Inkamane, and in 1953 proceeded to the Ndaleni Art School near Richmond in Natal. After teaching at Glencoe, Natal, he became the successor to Selby Mvusi at Loram Secondary School in Durban. He later moved to Kwa-Mashu where he taught for many years at the Isibonela High School. He then became Inspector of Art Education with the Kwazulu Department of Education and Culture at Ulundi. In 1962 Ngcobo was the first black artist to have a solo exhibition at the Durban Art Gallery.

Ngcobo explored both painting and sculpture as media in his expressionistic use of colour and form. Inspired by his upbringing and environment, he depicted urban life, tribal folklore, rituals and customs, typically portraying groups of people, usually with undercurrents of mysticism. Ngcobo’s earlier palette consisted of a selection of bold primaries with red, yellow and green illuminating his canvasses, while his later works became more subtle, with his palette toned down to softer blues and greys. Exploring the indigenous character and essence of his African environment, Ngcobo broke away from the customary art practices of the early pioneers with a shift in style, described by de Jager as … more forcefully expressed figurative expressionism which was to be become characteristic of the work of many Black artists .

‘Three labourers’ is reminiscent of Jean-Francois Millet’s ‘The Gleaners’ and Vincent van Gogh’s ‘Two woman digging’, but, unlike the attempts of these European artists to capture the beauty and simplicity of peasant life, Ngcobo skillfully utilises his art as social commentary; creating greater awareness of the hardships and suffering some have to endure to eke out a living.

All three labourers have their heads turned down, their bodies bent under the burden of their plight, with hands and feet enlarged and distorted to emphasize their basic role as manual labour. Searching for their identity, the viewer is left with two hats and a deep downcast shadow which obscures or erases their individuality. This, together with their uniform blue overalls, robs them of their humanity, and accentuates their powerless and vulnerable position at the bottom of the prevailing economic order.