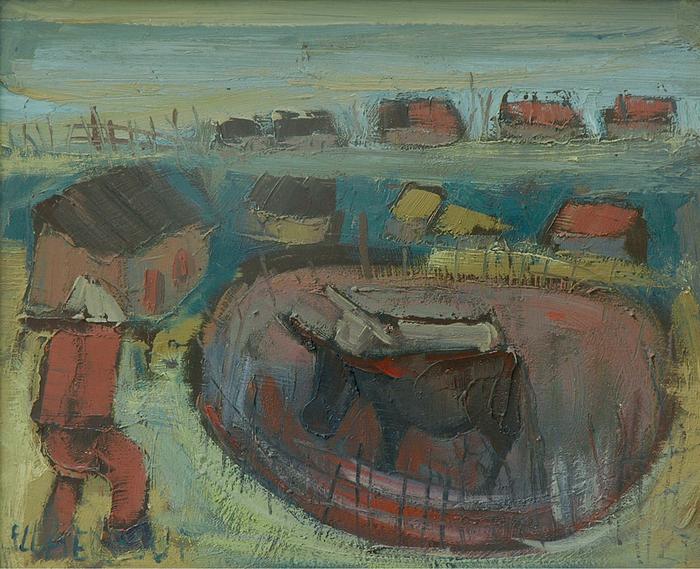 Frans Claerhout, or Father Claerhout as he was more affectionately known, was born in Belgium and came to South Africa as a Catholic missionary in 1946. He completed various language courses to help him adjust to the local cultures and customs, before being sent to Bloemfontein in the Orange Free State in 1948.

Claerhout had no formal art training but came from an artistic family, and had belonged to a local art society during his student years. He visited Belgium and toured its museums in 1957. On his return he began to sketch and paint with total dedication, and had his first solo exhibition in 1961. He befriended other local artists which led to the establishment of the Bloemfontein group. In 1960 he moved to the St Francis Catholic Mission in Thaba ‘Nchu, a 60 km drive East of Bloemfontein.

Esmé Berman discusses his work: Frans Claerhout blends wit and compassion in his quiet sympathetic style, which owes much to Flemish Expressionism. His subjects are the people and the village scene around the mission station at Thaba ‘Nchu. His palette inclines to warm, almost somber, tones; although it has brightened over the years, with flashes of clear blue and yellow illuminating the general ochre-umber glow. He often distorts and elongates his forms for emotional emphasis, but retains the overt visual character of all his subjects .

Thaba ‘Nchu was established as a homeland for Tswana and Sotho people under the 1913 Natives’ Land Act, and was characterized by widespread poverty and underdevelopment. The residents participated in subsistence- and small scale commercial farming ventures which mostly involved manual labour. The community headmen’s residences were clustered around the chief’s residence, and protectively built to include a ‘kraal’ for housing the animals.

Drawing inspiration from this scenery around the Mission Church, Claerhout used expressive brushwork and muted colours to add to the rural character of ‘The donkey camp’. The heavy, abstracted figure of the farmer tending to his donkeys as the early morning mist starts clearing, is rendered in a rich earthy brown, emphasising his role as a man of the land. Donkeys, a treasured possession in the rural community, were commonly used as pack animals, for ploughing the fields, and for personal transport, and became one of the trademark subjects in Claerhout’s oeuvre, symbolising a simple, sober way of life. The two donkeys, encircled by the camp’s fence and patiently awaiting their next assignment, are symbolically central to the composition, their role essential to the day-to-day survival in this tough environment.