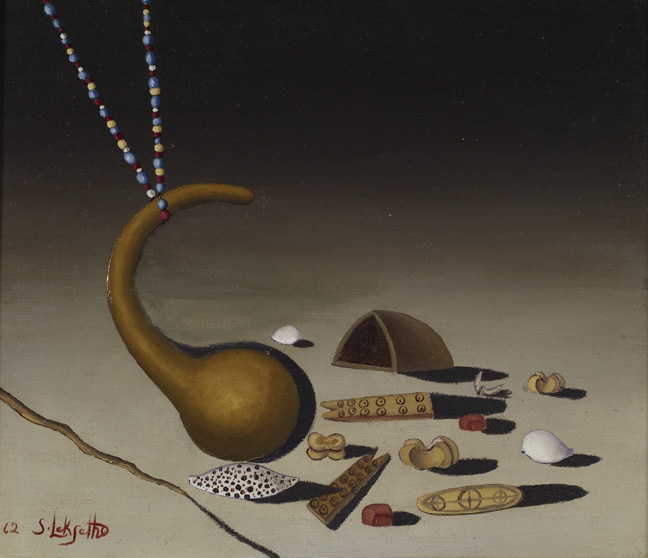 Born Simon Moroke Lekgetho, 23 January 1929 on the farm Schoemansville near Hartbeespoort Dam
Died 3 December 1985 at the age of 56, Ga-Rankuwa, Pretoria

Simon Lekgetho was a self-taught artist who advanced his natural artistic talent through self-study, and was taught the basic principles of painting by artists in Pretoria, one of whom was Walter Battiss. Encouraged to develop an individual technique and style by his mentors, he started painting seriously in 1952, and also taught art at his studio in Lady Selbourne, Pretoria.

Lekgetho’s oeuvre covered a wide range of subject matter – he enjoyed painting plein air landscapes, portraits and still life compositions in oils. He also referred to his collection of postcards to compose paintings of tribal life, animals in the wild, and San rock paintings. A meticulous painter, Lekgetho worked long hours, and took his time to finish a painting, constructing it layer by layer with a rich variation of textures.

Lekgetho’s paintings of divinatory scenes are always admired, not only for capturing the drama of the moment, but also for capturing the imagination of the viewer. Commenting on a painting similar to ‘Divination objects’ (Illustrated here), titled ‘Witch Doctor’, Elza Miles writes: Against an indefinite, dark background, Lekgetho shows the silent drama when objects are brought to light to reveal future destinies. The knucklebones, seashells, tortoiseshells, stone and divinatory tablets had been cast and the doctor had started to read the lay of the land for the woman seeking his advice.

In his 1962 publication, based on his scientific study of the Tsonga tribe, entitled The life of a South African Tribe, Henri Junod observes: Astragalomancy is not an esoteric art; every one in the tribe knows the bones, and their significance, and all the men attend the consultations and help in the interpretation.