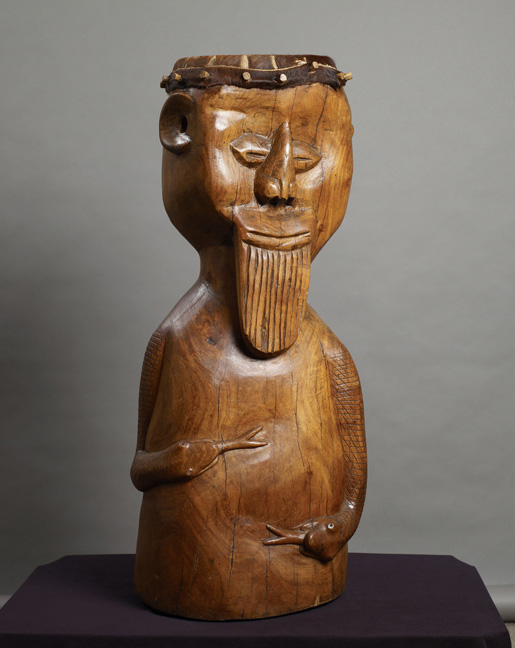 Jackson Hlungwani’s father taught him how to carve household objects, sharpen tools and work with iron. He herded cattle as a child, and the time spent in the veld offered him the perfect opportunity to observe animals, birds and fish.

Hlungwani combines traditional elements from his Tsonga heritage with those of his Christian beliefs in his personalised spiritual philosophy. These ideas are also the source of the images and the inspiration for his sculptures.

Hlungwani was ordained in the African Zionist Church in 1946, and later founded his own church, which he called ‘Yesu Galeliya One Aposto in Sayoni Alt and Omega’, at Bbhokota near Elim in the Northern Province. Since the 1960’s, he has been building low stone wall structures at the site he calls ‘New Jerusalem’, where he teaches his followers and helps the sick. At this place of worship, on top of a hill near his home, Hlungwani has placed his large wooden sculptures of characters from the bible, animals and fish, on and between the walls.

Lesley Spiro Cohen writes:
Hlungwani says that one night, in about 1978, the devil shot an arrow through his legs. He managed to shake off one of the arrows, but the other one stayed inside his leg. The next morning there were pus and blood-filled sores on his legs. He says he smelt like death and couldn’t stand it any more, so he decided to kill himself.
But before he could, Jesus appeared to him and said three things: he would be healed and would not die; he must serve God for his whole life; he would see God. He says Jesus also taught him how to heal with fire. Even today, he burns his own leg with fire, which he says eases the pain. Although he had been carving for many years, it was around this time that he began carving a great deal and produced many sculptures.