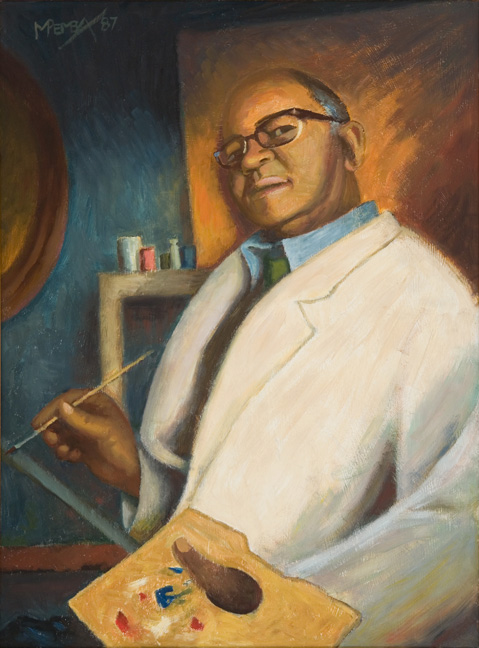 George Pemba worked mostly outside the realms of the formal South African art establishment, without its characteristic critical considerations. Despite his relative isolation, he can not merely be categorised as a self-taught artist with a dominating singular influence, for that would be an over-simplification of his oeuvre. Pemba’s artistic development had a multi-faceted history, interwoven with his shifting aesthetic persuasions, and influenced by a Christian education and upbringing. He grew up in a household which had absorbed the paternalistic English authoritarian principles of Victorian colonialism. This late self-portrait, painted in 1987, carries stylistic references to the long European tradition of self-portraiture.

Despite years of adversity and poverty, George Pemba’s painting career spanned six decades - providing a visual history of what he had witnessed in a transforming South Africa. His ideological progression to African Nationalism, and the re-discovery of his repressed Xhosa culture, added another dimension to his extensive oeuvre which can be collectively described as one of historical, as well as social commentary. Working mostly in isolation, he had established himself as a pioneer of social realism, taking his inspiration from the realities and struggles of urban black people’s everyday lives.

Hayden Proud concludes in the artist’s obituary:
Pemba was an artist in love with painting, unashamedly claiming the best of both European and African traditions as his own. Possessed of a deep humility, a profound sense of human dignity, and a loving sense of humor, his memory deserves a special place in the nation’s heart.