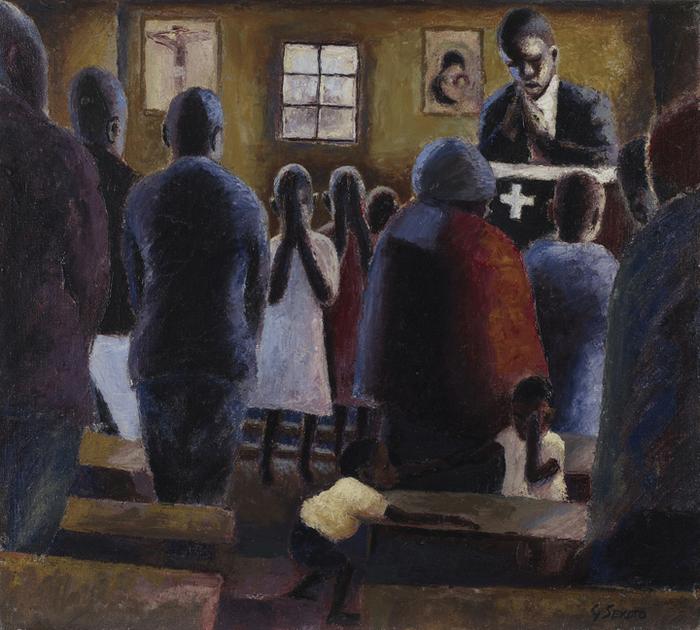 Jan Gerard Sekoto, like his parents, Andreas and Anna, was born at the Lutheran Mission Station, Botshabelo, on the Transvaal Highveld. Andreas later moved his family to the farm, Wonderhoek, about 30 kilometers from the Mission Station, where he worked as a teacher and evangelist. Sekoto’s formative years were therefore spent in a much regulated religious milieu - during his formal schooling at Botshabelo College, his well regimented days started and ended with prayers, and attending church on Sundays was customary.

‘Prayer in Church’ is a testament to Sekoto’s love of observing people and portraying their expressions and moods in his sketches and paintings. Here he accurately captures the devotion of the young girls in prayer, the respectful posture of the men in jackets, the comfort of the old lady wrapped in her blanket and even the mischievous antics of the toddlers in the pews.

This painting is a prime example of Sekoto’s technical ability and skill displayed during the Eastwood period of 1946 - 1947. His understanding of the principles of composition, form and colour, and his masterly treatment of light and shadow in this side-lit interior scene speaks of a confidence found only with an artist who is in control of his medium and technique. Both the artist, and the director of the Gainsborough Galleries, must have rated this painting very highly when it was exhibited on his 1947 solo exhibition there, as it was the second most expensive painting in the catalogue at 35 Gns.

Sekoto’s strict Christian upbringing did not result in a life devoted to the church or its beliefs, but rather in a philosophy which Manganyi describes as having turned his pursuit of art into a kind of personal worldly religion.
Sekoto wrote:
Art is a human virtue and I have given my whole self to it, for it promotes understanding among races rather than destroys it.